Pushing and stretching with literature texts

One of the benefits and curses of working in a small school is the small number of students in an exam cohort. I can easily mark the whole year group’s attempt at a question 2, but, at the same time, each student is the equivalent of one percent. During the mock period I have marked every student’s response to the unseen poetry element on the literature papers and it has made me think a little bit differently in how we approach literature in general.


For two years, I have been trying to work out how the literature papers are marked. Our first year was disappointed because students were obsessed with A02 in the extract. Our second year was a marked improvement and was incredibly strong, because we moved to focus on A01 rather than A02. Teaching students that the extract is there for them to make some A02 comment and that the answer to question doesn’t sit in the extract has had a big impact for us. The extract is often a crutch for students because they see it as a way to analyse to death an extract or link the extract to everything in the story.


In marking one hundred and so unseen poetry extracts, I have spotted a common problem and understood something that affects the majority of literature questions. The development of ideas. We all know the problem with PEE and its hydra like kin, but there is a problem of students stepping up and moving away from this. I have liked the use of how/what/ why structure and varied it to include this format:


Dickens presents the divide in society as …


That way students keep coming back to the writer. The writer often gets lost in a rabbit warren of explanation as a student connotes to death a word. This approach, however, has worked for some weaker students as they are ten poles for an idea.  The start, middle and end keep the focus on the writer and his or her intent. Overall, I have found this really helpful for getting students to Band 3, providing they explain an idea in some detail.


The problem I find is with bright students getting out of Band 3, as they tend to be stuck on PEE repetition. A typical paragraph tends to go PEEPEEPEEPEE. They list points rather than develop them. Those points might be different points or different examples of the same thing, but there is no development of ideas. Point. Evidence. Explain. Repeat. It is interesting how students don’t get out of the PEE cycle easily when it is pointed out to them.


This week, I have tried an approach in planning to address this problem, because students are making the right points, but they are not doing anything with the idea. Recently, I saw some example paragraphs that were described, for students, as being evidence of a Grade 9 quality. I felt that they missed the point about development of an idea, so I thought about how I could get that across to students.


Anyway, here is the lesson I did with students. In the first part, I modelled how to plan a paragraph and then, in the stages after that, the students worked in pairs to produce their own and then they made one individually.


The starting point for the planning were these ideas. They could pick a poem they wanted to and an idea they felt they could explore in some detail.


This is the tool I used for the planning. I will probably adapt and change it over time. 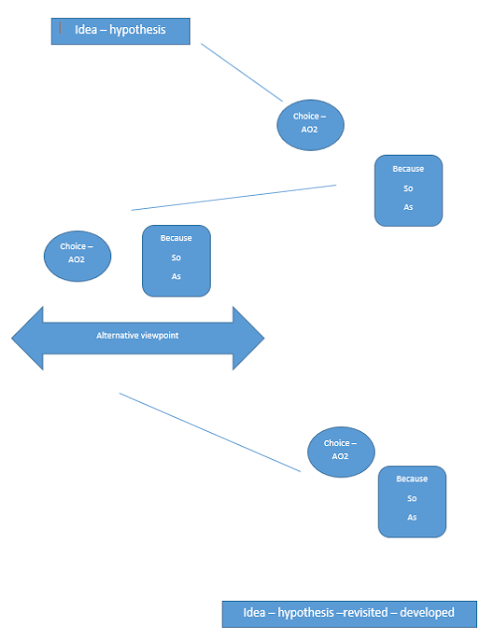 Once the students had their starting idea, they could explore the idea in some depth. Take this example for Ozymandias a student wrote:


Idea: man is weaker than nature


Man is weak in relation to the rest of the world featured in the poem. The once powerful legacy has been reduced.


[explains how man is weak]


Nature is far bigger and superior to man. The lifeless landscape contrasts with our traditional view of nature, which highlights nature’s power to provide life, nourishment and existence.


[develops the reason for him being weak]


Man has a superior view of himself and that is undermined by the fact that there is nothing left of him now. Man is deluded and think she has power and can control his world. Nature’s power is subtle and slow, but clearly more powerful.


[develops the relationship between man and nature]


Idea revisited: nature has the power over life and death and mankind needs to worship nature and not himself

When we did this, students were able to develop and extend an idea. The key thing was the progression of an idea and leading to a new conclusion or hypothesis about the poem. We had some interesting ideas in relation to the points given and students engaged with the poems on a deeper level than before. I discussed with students how each part could be a paragraph on its own, but the development from one idea to another is vital to show depth of understanding.