How I teach 'An Inspector Calls'

For years, I have been teaching J.B. Priestley’s ‘An Inspector Calls and, for once, I thought I’d share how I go about teaching it. This isn’t a scheme of work or a massive opus. This is simply just a collection of things I do with the play. Nothing fancy. No frills. All about the learning.

The Rules of Edwardian Society


I always start with these statements to help students learn something of the attitudes of the time. I often keep testing these again and again. Throughout the reading of the play, we revisit the simple PowerPoint list and make references to it. What rule is being explored at this point in the story?


•       A poor person should be grateful for all that the rich help to provide them.


•       A rich person could sack or punish a poor employee without consequences.


The play is about the relationship between the poor and the rich.


I tell students that if there is one thing I want them to understand and remember is this message. This then becomes a mantra when reading, but then after reading it I then ask the question: Is the play just about the relationship between the poor and rich? Often, this generates many responses.


I love a metaphor. One metaphor I like to use with ‘An Inspector Calls’ is the way a person enters a house in Edwardian times. Often students think that there were parts of society where rich and poor met, like doorways. The servant’s entrance is a very strong image. To extend student’s understand with clips of Downton Abbey and/or Upstairs Downstairs. Both highlight the system of two worlds in society.


Another metaphor I like to use for this play is the ‘poverty cliff’. Eva Smith is on the poverty cliff. Each encounter with the Birlings pushes her closer to the edge. A nice metaphor to explore when studying the play.


As part of the learning, I make students watch the three hour long film. Joke. I don’t. No, I think students need to know some interesting ideas about the Titanic.


Then, you have the iceberg and the sad sinking of that ship.


·         The rich were more likely to survive as they were nearest to the life rafts.


The Titanic is a microcosm of Edwardian society. An event, an iceberg or war, tore a hole in that society.


Tracking how characters / language changes over the play


I am a big fan of this approach. I do it to death with the play. I like taking sentences or quote out of the play and look at the changes between each one. Take the following examples from the play.


From the above example, a class came to the idea that Sheila matures over the course of Act 1 and Act 2. She starts of childish and frivolous and becomes hard, cynical and incredibly sarcastic. The choice of ‘mummy’ and ‘fool’ helps us to see that change. As a result of this finding, we, as a class, explored why Sheila stops being emotional. We came to the idea that she is saturated with emotions so she become dismissive to things in the play. Simply put: she can’t cope with any more emotional torment.


The beauty of this approach is that I am constantly looking at quotes and revising quotes. I do this as I am going along and I do it at the end of the play. It is great to explore how the language changes from act to act.
Mr Birling


‘….perhaps we may look forward to the time when Crofts and Birlings are no longer competing but are working together…’


‘I must say, Sybil, that when this comes out in the inquest, it isn’t going to do us much good. The Press might take it up.’


‘Now look at the pair of them – the famous younger generation who know it all. And they can’t even take a joke-’


To help students along with the analysis, I get them to:


Who is on stage?


Without the support of a stage version of the play, I find this document helpful with tracking entrances and exits. Students colour in when a character is on stage. Then, you can see how the play is structured around the characters being on or off stage. 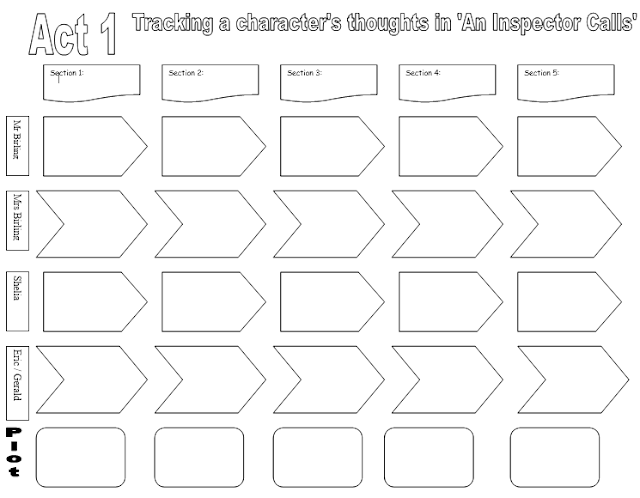 I enjoy working through the play this way as it helps make students see the subtle changes in mood and tone between pages of dialogue. Plus, it saves me loads of planning and work.


Every person is a handbag full of emotions. However, when students explore drama they reduce the complexity of emotions to one simple emotion.  A character is angry. A character is ashamed. I find it helps to get students to see emotions as complex and contradictory. At any given moment, a character is feeling X, Y and Z.  Sheila feels angry, pleased and jealous at this moment in the story.


A student’s opinion is very important when studying a play. They are, in effect, the audience. Frank, what do you think of the opening? It’s a bit boring, sir. Yes, why do you think the audience is supposed to be bored at this point? To make us hope that something interesting will happen, next.


These simple questions are important, because they all relate to the audience and their reaction. Of course, the ‘why’ is key here.


Who do you dislike the most here?


Is this moment interesting for an audience?

I am sorry there isn’t a single ‘Top Trump’ card activity or ‘Tension graph’ in sight. #gimmickfreeteaching

Email ThisBlogThis!Share to TwitterShare to FacebookShare to Pinterest
Labels: An Inspector Calls