In the 90s, there was a show that I watched with my parents. Challenge Anneke. The premise of the show was simple. Anneke Rice had two build, fix or renovate something in a short space of time. The show tugged on the heartstrings and featured a car I always wanted, which fitted inside in a lorry like some kind of Transformer.


Anyway, I am looking to do a similar challenge. A colleague of mine is visiting schools in South Africa to help them build and improve schools. I think it is a fantastic opportunity. So far, as a school, we have donated textbooks and resources. But, they need something different. They need help with teaching and teaching resources. Things are pretty basic in terms of resources. They need guidance for teaching a lesson. A lesson with very little resources and texts. Basic lessons with limited resources.


Between all the teachers on Twitter, we have a wealth of resources. That’s why I’d like to enlist some help with helping several schools in South Africa. 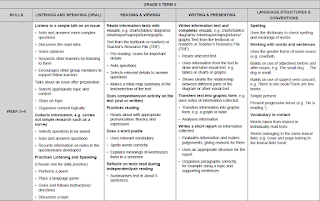 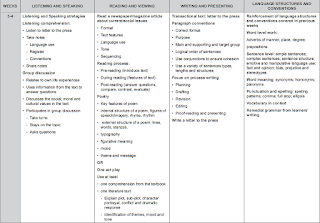 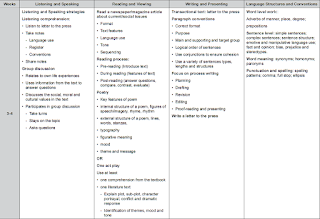 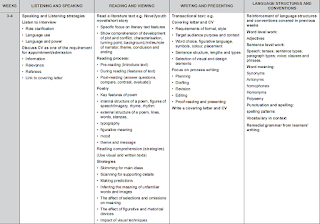 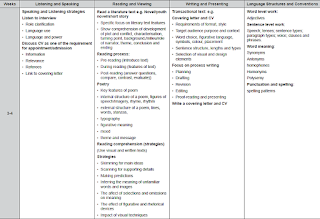 We are at the end of the year and most of us have some gained time. Or, we have resources at the click of a button.


I’d be eternally grateful if you volunteered to write one lesson plan.


One planned lesson based on having no photocopies and just a board with some text written on it.


Pick on aspect above.
Like Anneke, I only have a short space of time for this. A week.


If you are willing to help in this challenge, then DM me on Twitter @Xris32.

How many different Macbeths have I got to remember for the exam, Sir?

Dual coding has become a little focus of mine, and others, over the last few months and it is an area I think there’s scope for reflection in the classroom and especially the English classroom. It has highlighted a few problems for me.


Recently, I picked up a revision guide for students on ‘An Inspector Calls’ and in that book alone it had ten different visual images to represent the character of Mr Birling. It included a comic version, several stills from various film and TV versions, and then several stills from various play versions. On reading the revision guide, students could be looking at, to them, ten different characters. There wasn’t any visual consistency. Or visual harmony. In fact, you could place all the characters in a line up for English teachers and they’d struggle to find the common factor between them. For me, this highlighted several problems with using images in the classroom. We bombard students with images.


Pictures on PowerPoint or handout are brilliant, aren’t they? They show that the teacher has tried to engage with students. Look this isn’t dull stuff. It is interesting because it has pictures? Pictures make the work look nice. Nice and pretty. There’s become an unwritten rule for any literature focused PowerPoint that the teacher will include several googled pictures. I am going to question the use of photographs in PowerPoints and challenge their usage.


Take any still or photograph from a literature text and you’ll see that your attention isn’t solely focused on one thing. You don’t just look at a picture and see one thing. In fact, you see many things working together to convey ideas or gain interest. Pictures are quite attention seeking.


What do you think of my hair?


What do you think of my clothes?


What do you think of my lighting?


What do you think of the angle of the picture?


What do you think of the colours?


What do you think of my setting?


What do you think of my background?


There’s a large team of people who have worked hard to create this image and there are several elements working in tandem to get the final picture. A picture is never just a picture. It is something bigger. Cinema is about being visually stimulating and so therefore photographs from films are often visually stimulating. They are designed to stimulate. They have a big screen to fill. So when we put a picture on a slide it is adding something stimulating to the slide. Where we thought we were using a photograph to revise a plot point, we are actually stimulating other thoughts and idea, which could detract the student from the main purpose of a lesson. Yes, you might want students to think and be stimulated, but is that moment the right time for it? There’s a big difference between having a picture on a slide for the primary purpose of teaching an aspect and a secondary purpose of reminding and supporting the learning. Using a picture in the secondary way detracts the learning.


This year, I have taken to drawing. Drawing images from the texts to represent scenes. I have stopped googling for images and I use my own drawings and adopted my own style of visual coding instead. 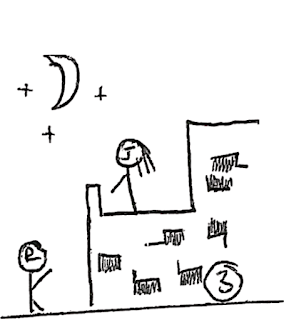 By using it, I am summarising the plot and at the same time reducing the visual information that students are receiving so that there is a greater level of clarity. So when I ask students to make connections in the rest of the play, students are not think where they have seen the colour red in the play or who else in the play has such a bad haircut like Romeo. The focus, from my experience, becomes a lot more relevant in discussions too. Students are able to talk better about the texts and make more interesting connections. I have, and it took me a while, drawn the majority of the key texts so that I am able to do this and have a consistency of style. I’d also say that this way has speeded things up for me. Present a photograph to students and I’d say they get confused initially as they work out the where, when, why of the image and ask several questions along the way about facial expressions and hairy nostrils. This way for me has made things clearer in lessons for me and helped improve my explanations. I show the picture before reading. We read the scene. We look at the picture again and explore staging choices, writer’s message and language devices through the picture. Then, we look at another scene. Later, I might pick the picture out again to revise or link to another scene.


By using my own pictures, I am build a visual consistency across lessons. To be honest, I don’t think we have ever considered this. However, I have seen PowerPoints with three different actors playing Macbeth for one lesson. Or, worksheets where they have mixed up the actors playing the different parts from two different versions of the play. Lady Macbeth from one version. Macbeth from another. We don’t always think of the visual through line with text. Do we always use the same actor playing Macbeth in everything we do? I think there is nothing wrong in looking at how other actors and productions present the character, but I think we should possibly have a dominant image or actor to help students develop their knowledge of the text. Give them a carousel of bearded blokes and they will struggle to tell you who is Banquo and who is Macbeth. Plus, between lessons they have watched several TV shows or films and met lots of other people. The chances of then remembering one is limited when you haven’t just given them one to recall.


I like Baz Luhrmann’s ‘Romeo and Juliet’ as a movie, but I don’t like it as a support for the teaching of ‘Romeo and Juliet’ because, for me, the visuals dominate the language of the text. Both are there, but the imagery is domineering. Students remember the imagery, rather than the text. If only Luhrmann toned down the visuals, I’d be a happier. Instead, I have opted for the Globe’s versions of ‘Romeo and Juliet’ and ‘Macbeth’ recently because they have changed the balance for me. They use a more naturalistic visual style and they reduce the emphasis on the visuals so that the focus can be on the verbal aspect. However, you are occasionally distracted by an audience member in dayglow yellow – must be a Baz Luhrmann fan. Do students really notice the tone and intonation of character in Luhrmann’s colourful 100 BPM version? They could tell you the colours of things and the music played at a point, but they’d rarely be tell you where the emphasis on a word was in a line.


So, there a several questions I think we have to ponder in the classroom, when thinking about the visual elements of a lesson:


How many interpretations of the key elements of the text have they seen?


What is the primary visual source for aiding the teaching of a text?


When and where should I introduce different visual representations of the texts?


Is the picture / image on the sheet / slide part of the primary learning?


How many Macbeths have they seen this lesson?


Who is their Macbeth?


When should they see other Macbeths?


Is picture of Macbeth really necessary at this point in the learning?