Teaching analysis is about hundreds and thousands - not six.

Teaching a whole text can offer challenges to teachers. Some students struggle with the immensity of the whole text. Often, a default method for them is to revert to storytelling. Rather than search for choices made by the writer in discussing an idea, they tell you the story and refer to examples of the idea in the book. The best students writing about text are able to move swiftly and effortlessly across several choices used across the text. They can go from word analysis to characterisation to structure in one paragraph, while others go through a clunky regurgitating of terms the teacher mentioned in lessons.


This term, with ‘A Christmas Carol’ and ‘An Inspector Calls’ I have been looking at how students can make connections across the texts, and more importantly fuse the analysis of words, literary devices, structure and characterisation together naturally. Of course, I could get students to look at each one individually, but they need to do it naturally and automatically in their exam and writing.


One question, we need to ask ourselves is: do the students have enough knowledge of the choices the writer has relating to the words, structure and characterisation?


How many choices do they know?


If they only know a limited number of choices made by the writer, then they will either force their knowledge to fit the idea, or they will revert to plot detail.


Also, a lot of teaching of texts involves teaching knowledge relating to specific themes. We pick the key themes and teach the key choices relating to those themes. Therefore, what is concrete in the brain are these dominant themes and dominant choices, which are often shaped to fit another theme, if the students hasn’t been explicitly been taught, in the exam.


To deal with this aspect, I have created triangles. 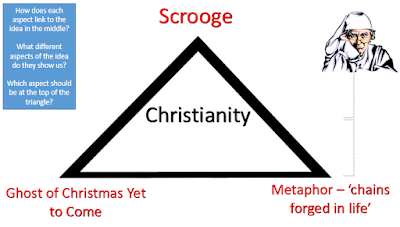 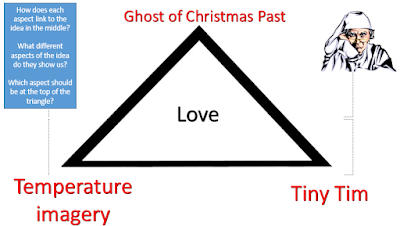 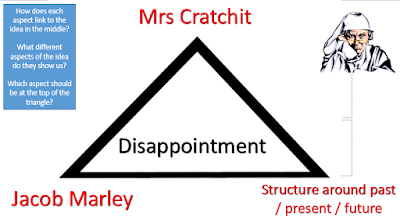 Simply, I placed three things in the text together and students had to relate them to the idea. At first, I focused with the emphasis on characters. I placed two characters on the triangle and one point about structure or a language device. Then, occasionally, I mixed this up.


The great thing I found about this was the creation of interesting links and connections. I once placed the idea of ‘awe’ in the middle and this produced some really interesting explorations of the texts such as Tiny Tim is the epitome of awe, yet Scrooge is the antithesis, because nothing creates that sense of awe in him.


For the literature exam, students don’t need an endless list of techniques, but they do need to select and pick the appropriate pieces of evidence to use and explore the connection between these bits of evidence.


Then, I’d get students to turn the triangle into a square, because I love a cross-curricular link. Then, they see what they’ add as the next point. Or, I get them to rearrange the points and decide on which goes at the top as the most important or effective choice. If I wanted to be obtuse, I’d throw in a random or obscure choice to get the little grey cells working.


Finally, I’d introduce an extract and get the students to find evidence to support these ideas.


Another thing I did was list a large number of choices made by the writer. 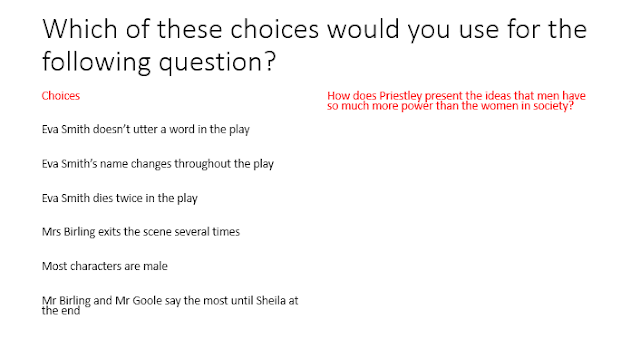 This was a simple thing to do. I gave students the question and a list of choices. Some relevant and some not.


If we are going to get students better at analysing texts, we need to give them endless knowledge of what sort of things they should be talking about for. We need them to be knowledgeable about choices.  As I do this, I will be removing the lists later. But, they need an internalised list to help them plan an idea. That’s what this method does. I am working on building their internalised list of choices.


Rather than spend endless lessons on the six big themes of the text, I am exploring forty or so themes / idea in the text with students. Rather than have the same six techniques used for every essay, I am having fifty or so different choices in responses.


We can’t rely on set essay plans to help students. This isn’t ‘Of Mice and Men’ any more. You no longer have six characters, six themes and six key moments in the book. In fairness, ‘Of Mice and Men’ was so easy to teach because of that aspect. It was even easier, when you looked at the previous exam, because that reduced the teaching to five characters, five themes and five key moments. Even less to plan and teach.