Terminology exposure - Of course, you know what a simile is!

There is a schism in English teaching. On one side is the naming of parts of sentences. And, on the other side is the creativity aspect. Each one seemingly fights against the other over and over again. On Twitter. In some people’s heads. For me, the both elements can exist quite happily in the classroom. When I explore terminology, I don’t turn the heating down and don my Dementor costume. Equally, when I am exploring meaning in a text, I don’t put on my kaftan and light a rose scented candle for ambience. A great teacher of English will have the feet in both camps. In fact, they’ll see the link between the two. They’ll see how the technique aids the meaning and how the meaning is supported by the language choice made by the writer. The don’t hold to pitchfork and denounce Brenda in Room 27 because she spends lessons talking about terminology.

It makes me laugh how this schism plays out again and again, when there is a manufactured divide. Like all things, there’s an extreme viewpoint and that is often the one used to judge the other viewpoint. There are some who’d like you to think that novels are analysed sentence by sentence for their grammar. There are some who’d like you to think that creative writing is without any rules or limits. I’d argue that we all need to be in the funny middle and a bit of both sides. We need to be an amalgamation of both sides. To be human, is to crave structure and meaning. An English teacher should help students understand and replicate structures so they can unlock meaning and create their own.

Finding a balance is hard. Too much on one side and the balance is off. For me, most of our problems lie in the fact we don’t have a clear language or register for the English classroom. In fact, some words are used so infrequently in a teacher’s dialogue that there is no wonder students feel that they don’t know what a technique is, even after that lovely unit on it in Year 7. How many times is the word pronoun mentioned in a week? A month? A term? A year? A key stage? What is a child’s exposure to that single term? We know exposure increases confidence and understanding, but how do we do that in the classroom?

The recent lockdown situation drew this whole thing to my attention. In preparing students for some unseen poetry work, I was surprised how inaccurate students were when talking about similes, metaphors or personification. They were hesitant to identify and then hazy in their explanations. That’s after five years of teaching. Why were they not so precise with something they had clearly been taught throughout KS2, KS3 and KS4? The answer relates to exposure. If we treat terminology as if they are in their own pocket universe, then there’s no surprise that students treat them separately and don’t blend knowledge. If we only refer to similes when they crop up in the text, then we are asking a lot of their memory each time they are exposed to it. Or, as often the case is, the teacher asks the class and waits expectantly until the bright spark in the class puts the class out their misery with an answer.

Precision is something students often lack when analysing a text. That’s why they use ‘word’, ‘sentence’ or ‘phrase’ often in analysis, because they lack the conviction to link a term to what they have spotted. They know something is going on, but they can’t tell you what. The writer uses the word ‘splodge’ to reflect how messy and dirty the place was. Precision is a mixture of skill and knowledge generated over time. Therefore, we need to more fruitful exposure. The problem comes with how to be expose students to this without the need for me putting on my Dementor costume.

Well, here one approach I have tried with some success. The principle is fairly straightforward and works against the usual approach of grammar themed comprehension questions. Instead, I used all the poems students had studied over the previous lessons.

Students were given isolated lines from a poem and they had to decide if they were similes, metaphors or examples of personification. I kept to these three for the simple reason is that students struggle to separate the three. They often describe one as the other. Students simply had to write the number and the name of the technique in their book. 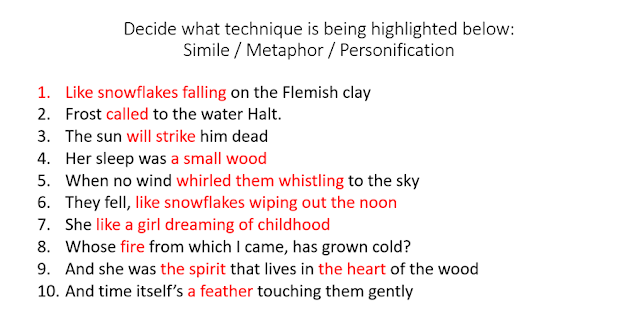 We fed back the answers and corrected any misunderstandings. Students were able then to see where they went wrong and discuss why they went wrong. For me it is important for students to see lots of examples of similes, metaphors and personification because that adds to that extra exposure. But also, it gives students a clear picture of how similes can be manipulated and shaped. There’s even an idea of sharing lists of similes or metaphors when getting students to write creatively – let’s leave that for another blog. 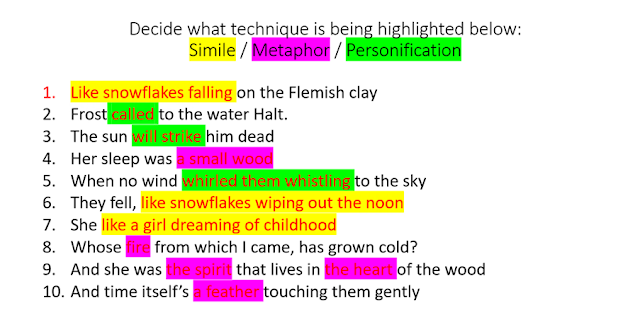 Get your scented candle at the ready! We then looked at the list and decided which are positive and which are negative uses of simile, metaphor and personification. Added to this, we discussed what they made us think or feel and which one we found the most effective.

Then, we did the same thing again for word class – so get your Dementor costume on! We even saved on paper and writing, because the student just needed to write next to the number of Part 1.

We explored the answers and again dealt with any misunderstandings. At this stage, we also talked about the impact of the word choice. Is it a positive or negative thing? What does the word mean? Why do you think the writer chose that word instead of another? 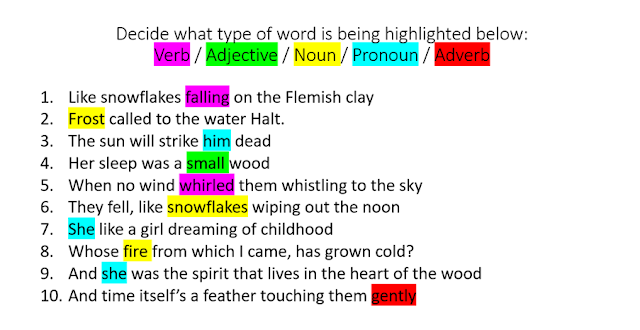 This whole process was repeated a few times over the four weeks with different text and their responses to unseen poetry improved. Their confidence at naming terms improved as too did their explanation for the meaning. They were combining terminology with complex understanding of the choices alongside the impact on the reader. Fifteen minutes. That’s all it took. It included revision, testing, addressing misunderstandings and improved knowledge and exposure of these terminologies.

I don’t think this can be a model used throughout a curriculum, but it has scope for looking at a Shakespeare text. Looking at the similes and metaphors in a scene. Building on their text knowledge and exposure to techniques.

If students only face a technique when it crops up in a text, then we are doing them a disservice.