Some forms of writing come naturally. We are wired to tell stories and that shows itself when students write stories. Other forms of writing are not so natural. Language analysis doesn’t come naturally or automatically and it something  that has confounded many a teacher and, still to this day, we are collectively trying to solve it.

I have discussed before that there are generally two modes of writing in schools. Creative writing. Explanation writing. Students will flip between the two throughout the school day. Explanation writing tends to be the dominant form of writing and largely a student’s default. That’s why when getting students to write something in a different genre the result becomes either a narrative or a very dry explanation. Take a newspaper report. Often, we get a story or a dull explanation of an event.

As English teachers, we continually fight against this type of explanation writing. This beige writing. I can recall my school days and I was an expert in beige writing. I could endlessly write pages without much thought and construction. One reason … Another reason… Therefore… However …. In conclusion. Students become fluent with explanation writing but don’t shape their thoughts or ideas. It is simply plucking an idea from their head and explain it. They ramble and ramble, hoping that some of it might be interest.

The problem with the exams is that, in English, the questions dictate a different style of writing. For example, for question 2 you need to summarise and then question 3 you need to explain choices. For each one there is a different style for writing.  The closest equivalent for this is asking a singer to sing in different styles. German Trance[Q2]. Jazz[Q3]. Folk[Q4]. Heavy Metal [Q5]. I can just imagine Kylie singing a set with all those styles.

The exams don’t rely on simple explanations. And, that is the problem for students and teachers. It is the reason  why students struggle so much with the current GCSE exam papers. They are a messy chimera of writing styles. We are expecting students to go from Disco to Country and Western in seconds. That’s why they default to common mode of writing: explanation.

As teachers, there’s a lot we do to help students get a mental image of a particular style of writing. We give them model examples. We collectively write a response. We give them sentence openings. Even after all that, the first attempt at getting the writing style response is pretty rubbish. In fact, I’d be bold to say that the first time a student attempts something shouldn’t be marked. It goes without saying: it will not be good. We don’t, after all, judge a person’s driving based on their first driving lesson, so why do it for the first piece of writing?  Oh, look you got 2 out of 8. That’s really good. Most people get 1 on their first go.

We are stuck with these messy exams so we have to work with them. That’s why I have been working on establishing a mental model for particular writing styles that aren’t natural, or automatic  for students. This is an example I use. I photocopy a load of these and students complete them in a lesson. 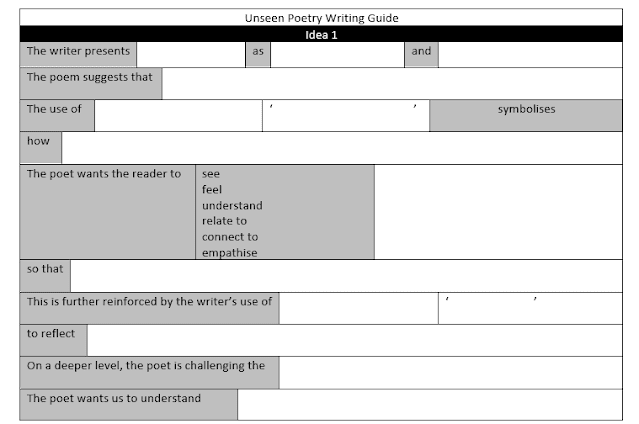 The idea is give them a stronger mental picture on how to write rather than default to beige explanation. Each lesson, they are reencounter the model and format with the idea that it is committed to memory. Then, after a fortnight of completing these they have written an independent response. I have been impressed with the quality of responses from students when filling these little sheets. The level of understanding has been great and sadly this has been hidden previously,  in some cases, by a student’s inability to articulate thoughts using ‘beige explanations’. The ideas are there, but the form of writing hindered expression.

I have found the process useful because it helps shape the structure of an idea. All too often, when we give students sentence openings, there is very little cohesion in the writing. The sentences are bolted on rather used to build and develop an idea. This process here works to instil a clear structure beforehand so that when write independently they have the skeleton to work with and then confident to move away from it when necessary.

Practice is a funny concept in English lessons. Practice often amounts to redoing questions. Practice often involves a large amount of marking. Let’s all practise Question 2 everybody. Oh goodie – I now have a massive pile of marking which students will not get for a week and I will be hesitant to give them more because of the amount of marking. What if the practice was practising the thinking and the model image of the writing rather than writing a response? Yes, English is a subject with a massive amount of marking, but writing doesn’t always need to be marked. In fact, I’d say that familiarity and fluency are more important. What can I do improve a student’s familiarity with a writing style? What can I do to improve their fluency? Of course, reading lies at the heart of this; however, the writing in the exam isn’t one that occurs naturally in the wild.  Unless you plan to get students to reading thirty example responses for the exam question, then we need to look for another way.

We need to help them build a clearer mental model of what they need to write. The writing style of the exam questions are vague and bland so we need to work harder to make sure students have an idea of what the writing we are expecting them to recreate looks like.

I have added a copy of this sheet to my Dropbox where you will find more of my resources.