I have found that teaching online has shaken some of the ways I teach things. One thing that I have worked on, with some success, is writing paragraphs for literature. The online situation has made this particularly hard and difficult as we are teaching practically via séance. Knock once if you think Romeo is a flawed character. Knock twice if you disagree.

The whole process has made me look at how I help students to build up paragraphs. I usually tend to spend lots of time building up paragraphs so that students become comfortable with the basic components and elements of a literature essay.

Here’s an example of how get students to build ideas up around a basic paragraph. This is a sheet I give to students. 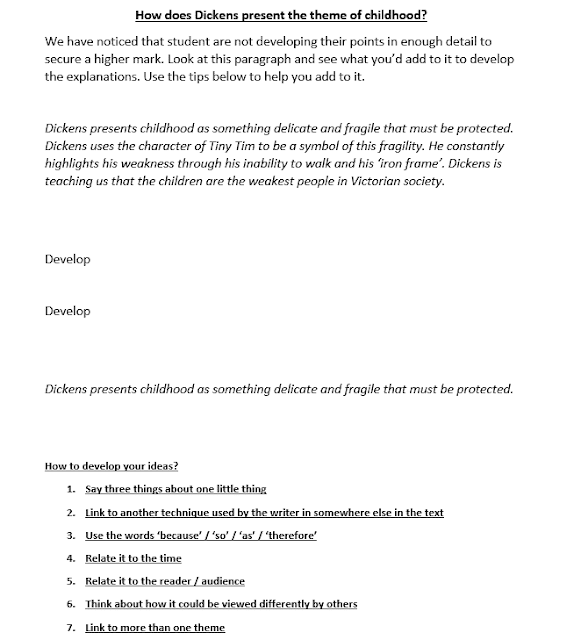 Instead of getting students to work on the ‘free flow of ideas’,  I build up the writing and get them to build up a paragraph like layers of cake. They have the basics and they build and add components. They have to expand and develop an idea. That’s why we have the develop and develop part. That’s an area where students really struggle. They can list ideas, yet they can’t develop and explore them so easily. That’s why I spend quite a bit of time on this. They look to build a case using different pieces of evidence and ideas. The development here could move to Ignorance and Want, allowing students to see how childhood is presented elsewhere in the novella. We include the opening sentence at the end so that the student works on a thread and keeps that thread going. They return to their original argument and add to it. Yes, I said this at the start ‘but’….

Since the lockdown, I have used the following model for writing paragraphs. Simply, I share this as a Word document and students write their sentences under the yellow highlighted sections. 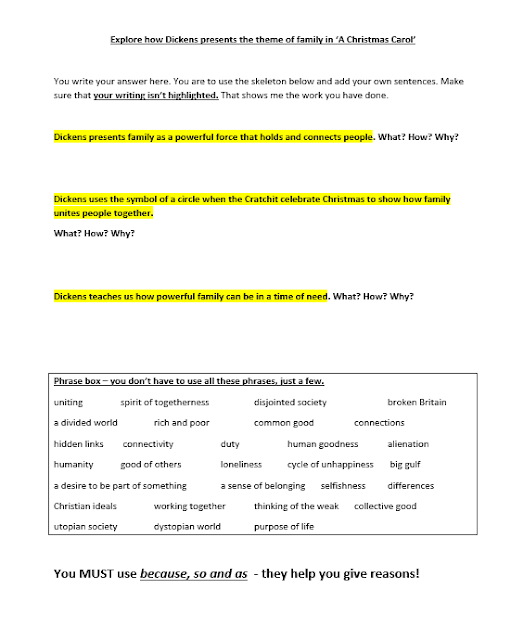 Students really struggle with writing paragraphs for literature for the simple ease of listing ideas. They are happy to state rather than explore and develop a point. Context often is a casualty of this. Where do most students address the context when discussing ideas? Often right at the end. This way we get students to explore the context from the beginning. When stating that ‘Dickens presents family as a powerful force that holds and connects people’ students need to relate that idea to the context. Large statements like that need contextualising to enable exploration. What at the time meant that family needed to be viewed as a powerful force?

I have provided students with some sentence stems to help with this section: 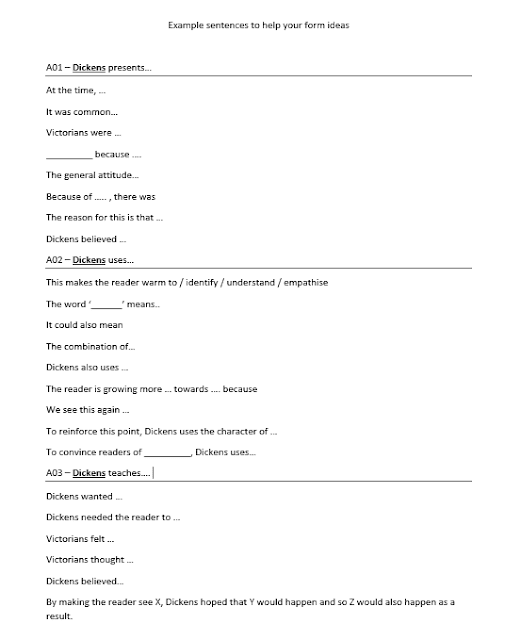 This then helps students to contextualise the point. Instead of having these bold claims, students tether them to some aspect.

Contextual understanding is always a difficult one to develop, but that’s often a result of reliance of attaching it to analysis. Here’s a simile and guess what? CLANG! It shows us how the Victorians were ‘meaney pants’ to the poor. Context actually needs threading through an argument. And, if students aren’t touching on it regularly, then they never will.

I tend to tell students that they need to play ping pong with ideas, when writing with literature. They bat between the small picture (choices, quotations, techniques) and the big picture (ideas, context, writers intent, reader’s reaction). The best essays bat the ball between these aspects. Small. Big. Small. Big. Small. Big. We’ve largely compartmentalised essay writing and all too often we see it as a the sum clear components. Like most things, it is a lot more messy and complex than we like to think. That’s why any attempt to reduce it to a simple formula will fail.

If we take, the previous sentences and thread Dickens wants and need in the exploration.

Of course, we’d integrate the sentences better, but it gives you an idea how things can develop and expand from a single point. Within several sentences, we have stated an idea, related it to context and then linked to the writer’s intent. We even have a quotation in there for good measure.

We don’t even need to be as formulaic as the example above. That’s why I provide students with phrase banks related to a question. Instead of giving them some fancy words, I give them words or phrases which I insist they use of few of. However, in creating the phrase bank I create phrases that have a whiff of contextual understanding. My favourite one at the moment is ‘broken Britain’. A simple little noun phrase which helps students to understand the injustice Dickens saw. Instead of relying on a phrase starting with ‘the Victorians…’ , we can feed contextual idea more subtly and naturally. The phrase becomes a tethering point so that things can be linked together. Dickens uses this technique to highlight how broken Britain really was.

Exam boards always complain about how students use contextual knowledge in a text. They cry in unison that it should be borne out of the text. However, I think it can be done well, but rather than structing it in the writing and building a clear place for it, we should be sprinkling it across the paragraph.  Across a paragraph we could have phrases like ‘broken Britain’, ‘Christian hypocrisy’, ‘economic imbalance’ and ‘symbiotic relationship’. They are all feeding contextual points to the main argument of a paragraph and all within sentences and not as discrete sentences on their own.

We talk about so much with context yet do we tether them with a phrase. Often students are trying to explain huge, and I mean huge, concepts and ideas relates to society and we give them a word describe it and a definition, but do we give them a blank of phrase to help explain and relate them to the writer’s choices and idea in the text? We often don’t. When teachers spend time thinking about socialism and how they teach it, they focus on the understanding of it and not the writing about it. Maybe, we should be thinking about how to write about socialism in texts. What are the phrases somebody would use if they were to write a about socialism in a text? Economic equality. Distribution of wealth. Liberal viewpoint. Problematic political idea. Class system.

It’s almost as if we need a schema of phrases and not just words.