One painting per poem with my stiff upper lip

There’s been a long standing relationship between English lessons and art. We have used paintings to inspire writing, to explore ideas and to explore the meanings of text. This year, I have linked each poem we teach to a painting. A piece of art.


I cannot say how much I have been influenced by Jeremy Paxman’s ‘The Victorians’. An exploration of the Victorians told through art. A thoroughly interesting book.


The book drew my attention to the story behind these paintings.

The Charge of the Light Brigade by Richard Caton-Woodville (1895) 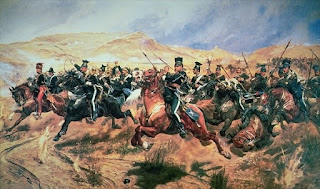 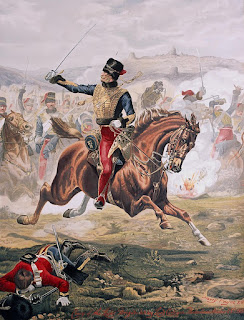 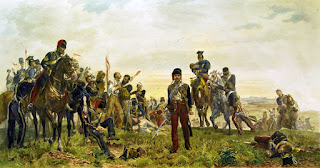 Now aside from the obvious history behind the events depicted behind the paintings, I was interested to hear how they were received. In particular, I was interested to hear how Lady Butler’s paintings were received. She explained: ‘I never painted for the glory of war, but to portray its pathos and heroism.’ Her painting the ‘Roll Call’ was very popular but also shocking at the time it was displayed. According to Jeremy Paxman, a guard was needed for the picture when displayed.  But for me, it makes a great counterpoint to the poem ‘Charge of the Light Brigade’. The painting is a stark contrast to the strength, might, courage and determination of the soldiers of the other pictures. But also it points to a shift in attitude. The ‘British stiff upper lip’ disappears in Elizabeth Thompson’s work. We see the real emotion behind the events rather than patriotic bravado.


The above collection of paintings made a great point of discussion in lessons on the poem ‘Charge of the Light Brigade’.  Then, I decided to use a painting per poem. I searched for a painting that I thought linked to the bigger issues in the poem. 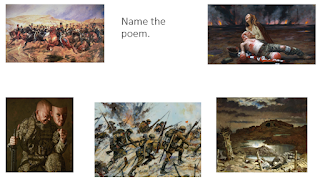 
The idea behind each picture was explored by the class and myself, after reading and studying all the poems. 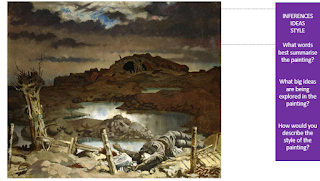 This picture links to ‘Exposure’ and the class came up with some of these ideas linked to the picture / poem.


*Purgatory – gap in the clouds links to Heaven


*Lack of depth – everything is united in war as the clouds, tree, people, landscape are all the same colour

The great thing I enjoyed was the ‘toing and froing’ between poem, idea and painting. The linking between the three aspects was a joy. Students making connections between painting and picture. After we discussed the ideas behind the painting, we explored the style of the painting. Was it realistic? Was it impressionistic? Was it abstract? Was it photorealistic? Was it an example of expressionism? Was it romanticised? How does the painter treat its subject? Are the colours warm or cold?


I think art needs a stronger place in the English classroom and I think English teachers need to be trained up in art. My Henrik Ibsen books at university all had a painting by Edvard Much on the front cover. Both artists were expressing psychological themes. They complemented each other. Art and literature are never far away from each other, but maybe they have grown further apart recently. Great CPD for an English department would be time talking about.