Notes on a scandal. I mean: Notes on a new GCSE spec!


Changing GCSE specifications is the metaphorical equivalent of redecorating your house. You pick the paint, move the furniture, prepare the room, and then you paint. But, then you decide a few years later that you picked the wrong colour and you do it all over again.  In my short time teaching, I will have taught eight different English GCSEs. I have gone through the process several times and there hasn’t been many changes between specs. This new specification, however, has a slightly different texture to it. I can cope with the closed book aspect. I can cope with the pre1914 text aspect. I can cope with older non-fiction texts. The exam papers are a different thing. 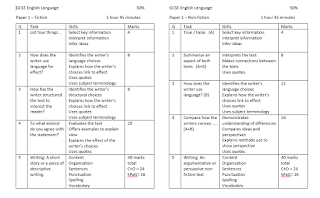 This blog is about my first thoughts on Paper 1 on the GCSE English Language exam. As a department, we set Year 9 students a paper based on an extract from ‘Oliver Twist’. We used similar question to those used in the specimen paper provided and we marked using the mark scheme provided.  We didn’t prepare students for the paper, because we wanted to see how they dealt with the paper and see what the major problems were. The paper will be a baseline assessment for teachers in Year 10. I wanted us to engage with the new format and look at the nuts and bolts of the paper, rather than spend six meetings deciding on the name of units of work instead of dealing with how to teach things.

Question 1: List four things from this part of the text about X.


This was a pretty straightforward question. Most students did well on this, but the most able struggled with it as, at times, they felt that something more complex was needed. Therefore, they overdid it. We all know examiners like to build students up with the questioning on papers, but with most able students they want to impress from the word go. Every question is an important question in their eyes. So it is no surprise that some students wrote a whole page, squeezing every last idea out for four small marks.

Question2: How does the writer use language here to describe X?


This is probably the one question that has changed things for us. Looking at the examples provided, I am worried. Because: simply this question seems to be about technique vomiting. Chuck everything at the reader and hope some of it makes sense. We have always spent time trying to build students up to make detailed and developed interpretations of a text and explore multiple meanings and ideas. We have always wanted students to explore choices made by referring to the wider meaning of the text. But, now the subject terminology is at the forefront of the analysis. In fact, it is the driver of the thinking. Whereas before the technique used to be an indicator of the writer’s ideas and thoughts, the new questioning focuses on the techniques and a brief explanation of the feeling it creates. Yes, there may be some implicit meaning, but the focus is clearly on the technique and its effect and not the whole text and the writer’s purpose.

I’d say that this question could possibly be the worst going by the full mark example. It goes a bit like this:


The verb ‘vomiting’ reflects the disgust of process and the use of colon highlights the importance of things as the writer is introducing a new idea. The writer also uses complex sentences which show the complexity of the process. The pronoun ‘us’ is used in a collect sense and then changes to ‘we’ in the second sentences, highlighting the different people out there.


Our students fell down because they didn’t list techniques. They logically, as we have always taught them to, worked through a point and explored it. They highlighted a feature and then developed it in several sentences. The example provided suggested that sentences in response to the question need to combine the technique and effect in one sentence. The X has the effect of this. The context of the writing is lost when the development is limited to a sentence.


The terminology wasn’t so much as an issue for our students (thanks to KS2); however, there is clearly a need to make sure every student knows a noun, verb, adjective, adverb and pronoun. I think the speed at which students have to list this terms is a problem too. Students get to them in the end, but they are not used to the parrot fashion of looking at a sentence and spotting noun, verb and adjective. I see across the land hundred of teachers making PowerPoint getting students to spot a noun, a verb and an adjective in an extract.


Plus, some of the technique spotting is dodgy. A complex sentence is referred to in the example and I’d say it is clutching at straws. How could you explain the use of a compound, complex or simple sentence and its effect?


Now, don’t even get me on the indefinite and definite article. I don’t give an ‘a’ or a ‘the’ about it. Seriously, we are going to be having students clutching at straws to interpret meaning. Tenuous is the term that springs to mind.  I also seem to recall that exam boards stating that technical terminology wasn't necessary for success in the exam. It seems that that is the opposite now.

I think from now on my classroom conversation will centre on using phrases like ‘ the noun highlights….’ and ‘the preposition shows’. I do think this question is a game changer. Repeat after me students……


A present tense verb shows it is immediate.


Furthermore, I think the model of point and develop will have to change. Paper 2 has more of the old style PEE potential, but this question will change the way we analyse a text.

Question 3: How has the writer structured the text to interest you as a reader?


This question I enjoyed. It is fairly straightforward. Students did better when they approached the text in a logical fashion and then made links back to the rest of the text. They were also able to explain things in depth with this question, so they did better because they were able to talk about writing, which is what we want our students to do. Talk and discuss it. Not list things.


It is again an interesting point that ‘subject terminology’ is plastered all over the mark scheme, yet I am struggling to find such terminology in the examples. I am convinced that there are none. But, this is the problem: there is very little terminology for describing the structure of a text. I can think of a handful and I studied English at university. So this aspect of the exam paper confused me.


Aside from all this stuff, I have noticed a new word in the mark scheme: judicious. We are now expecting students use quotes judiciously but not conservatively or liberally.


Question 4: A student said this: …… To what extent do you agree?


This is, I think, a dramatic shift in the textual analysis at GCSE. We have had elements of criticism implied in the tasks and the top band has always been marked as ‘critically evaluating’ the text, but I in all my minutes of teaching I have not had to teach this kind of critical discussion at GCSE. Boy, do I love the idea! We do explore the text when teaching, but we don’t make the critical aspect an explicit assessment aspect. And, I am, relishing the thought of it. However, it is a difficult aspect. When students are struggling to recall the key points of a text, they then have to work out if they think the portrayal of  Y is realistic.


t is true that with the papers I marked the students struggled with this immensely. Yes, it is the last question and worth the most marks so it should be harder, but there has been very little in the past curriculum signalling students to this point. I can see that KS2 is preparing them with a terminology splurge. There hasn’t been an emphasis on critical viewpoints. Looking at documents given, a lot of the emphasis is criticism of the text, but not arguing a defined view. Now this might be a picky point, but, in my book being critical about a text and exploring criticisms by others are two different things. Words like ‘evaluate’ and ‘critical’ are thrown around in English without a thought about what they actually amount to. We struggle to teach these aspects as sometimes, as some people might argue, they are hard to teach as students develop these skills through their breadth of reading. I cannot agree or disagree with the statement that my local restaurant produces the best curries in Derbyshire. Why? Because, I have only eaten curries in a few places in Derbyshire.


Obviously, the quantity of texts students read is important, but also offering critical viewpoints is just as important too. Our KS3 curriculum does include some of these in essays. How courageous is … ?  But now, I think we have to look at embedding this further. Rather than spot and explain a text, we are making a point and challenging it. Read this poem. Frank read it in the pub and he said it isn’t an effective way to show the reality of life. Do you agree with Frank or not?


Overall, I am happy with the new specifications. I like the shift back to fiction and non-fiction texts and not just non-fiction texts. This now seems to be a happy compromise. It means we can increase the breadth of texts we can use. As long as it is an effective description, setting or character, then you can use it. Looking at the wider impact on our teaching, I think these are the key points we need to build or make explicit in our teaching:


·         Students must have a concrete knowledge of the key parts of a sentence.


·         Students must be able to quickly spot parts of a sentence under pressure.


·         Students must change the way they write analysis so it is concise and follows the identify + effect pattern in one single sentence.


·         Students must be concise with their explanations.


·         Students must have clear terminology for describing the structure of a text.


·         Students must be familiar with different opinions about a text


·         Students must be able to formulate a response to an opinion about a text or aspect.

I might blog about the other paper when I get to it. Nonetheless, I have tomorrow’s lesson sorted out:


One student said: ''Of Mice and Men’ is the biggest waste of time and it is too predictable.’


How far do you agree with that statement?