What a carry on!

Romeo and Juliet is the new ‘Forever’ by Judy Blume


And, what filth! I now keep thinking back to all the teachers who recommended it and gushed over the play and quoted endless lines of the smutty stuff. I always prefer to teach a roman or history plays or something bloodthirsty. Little did I know that next door the literary equivalent of ‘Carry on Verona’ was taking place with naked weapons and cockerel’s stones aplomb. Only this Friday, I had to discuss breastfeeding, weaning and wet-nurses to a group of teenage boys and a few girls. The girls silently rolled their eyes as boys giggled in glee. One said: ‘We know when we get to a rude bit, sir. ‘Cos your voice starts to change.’ But, it is endless. Reading ahead, I have read the Queen Mab’s speech and contemplating glossing over the whole thing, switching to being a PE teacher or hiding in the cupboard. And, it will only get worse as we progress through the play.


A couple years ago, we had a lot of fuss over a drawing of a knife in a poetry anthology. Wait for the Daily Mail to get an idea about what we are teaching.  Our Year 10s are talking about it in the playground and priming others for the saucy snippets in future scenes. Who knew that information about smut in Shakespeare would be passed around the school like some literary black market?


Anyway, this term I am teaching ‘Romeo and Juliet’ and I still obsessed about structure. More so, than before. We, or I, want students to be constantly looking at structure. It might only be worth eight marks on one exam paper, but it means a lot to me. So with question 3 on the AQA exam in mind, I decided to make a PowerPoint slide with structure in mind. I was that lazy I couldn’t be bothered to include pictures, or even change the font. In fact, I was that lazy, I couldn’t even be bothered to change the colour or the font. Therefore, I only bothered to make a basic slide. On one side of the slide was the themes. On the other side of the slide was a list of events in a scene. Nothing earth shattering. A bit like this. 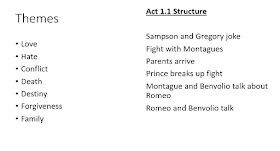 The discussion it generated was very good indeed. Students picked up on the following points:


·         The Prince separates the two halves of the scene – the Capulet half and the Montague half.


·         Focuses on the ‘children’ then we see the adults. It is how people view things. Look at the children first and then look at the adults to see what made them that way.


·         Quickly changes from one emotion to another quickly, reflecting how love and hate are closely linked.


·         Follows the pattern of conflict, resolve and a different conflict (Romeo is a bit sad). Ends on a conflict.


I then did exactly the same with the next scene and the next one and the next one. Not only does it revise the key points of the play, but it helped students talk about the themes from the start. It made it a common point for discussion. Just having the list next to the breakdown of the scene meant that students engaged with the themes confidently. And, because I am lazy and hate making displays, I am printing each one and sticking them to the wall. I will have a selection of sheets for each act with annotations and I might even use coloured paper for comic scenes. However, that might be too much work for me, bending down and adding colour paper to the printer.


The great thing about this, for me, was the ability to look at the beginning, middle and end of the scene and look at where is the turning point. Then, we compared the scenes as we went along. Look, the last scene ended with a conflict, but the next scene is just a digression away from that conflict. We are constantly looking for patterns or making astute observations. And, because, I have recently been a bit obsessed with Voltas in poetry, I have been trying to get students to look at the same concept in plays. How could they describe shifts in drama? For poetry, we have all these types of Voltas:


•       Concessional – admitting the problems or issues


•       Retrospective / Prospective – moves from the past to the future


Hopefully, by the end of teaching the smut-fest that is ‘Romeo and Juliet’ I’ll have some possible suggestions and ideas about turns in drama. A student’s understanding of the structure of texts goes beyond a simple eight mark question. It helps and develops a student’s understanding of the plot and the writer’s ideas. For too long, we have glossed over structure and placed emphasis on techniques and language choices. I feel now that students are getting to understand texts better and engaging them more. All down to a little bit more attention to the structure of ideas presented in a poem, novel or play.


Right, I am off to plan another lesson on ‘Romeo and Juliet’. Let’s see what filth Shakespeare has to offer up now. I feel that English is becoming a PSHE lesson.