They just don’t get it. Often, in English lessons or in parents’ evenings, I have had to justify the complexity of my subject. You see, Mr Curtis, our Cuthbert prefers Science. He finds things tough in English. I think this all boils down to the fact there are no right or wrong answers in English lessons. Well, there are blatant wrong answers: I think the poem ‘Futility’ is about aliens. Wrong. The rest are just shades of grey.

I used to think that this ‘right or wrong’ mindset was a gender characteristic. It makes sense that girls enjoy multiple meanings in a text because they are attuned to looking for meaning and emotions in how people speak and act. Therefore, it makes sense that boys prefer facts, clear answers and things devoid of ambiguity. But, over the years, this has proven to be all ‘a pile of pants’. These ‘logical brains’ are everywhere and they can be either male or female. I am also separating this from autism and the autism spectrum. Yes, most people can fit on the spectrum of autism and demonstrate autistic tendencies, but I see this as a phenomenon separate to autism.

Anyway, these ‘logical brains’ struggle when faced with a poem or text and they have to hunt for meaning. Moving from literal meaning to figurative meaning, is a rocky road for them. Why? Well, it could mean anything. These students could probably tell you what a metaphor is, but explore the meaning of one and they start to go all sweaty and start breathing heavily. I suppose, English is full of abstract concepts. Other subjects, apart from RE, deal with quite concrete aspects and you could say that knowledge plays a part in this. They have something tangible to prove its existence in the real world. Look, here are two chemicals and this is what happens when we put them together. Let’s measure them. I’d probably go so far to say that if a subjects used measuring equipment, then it is probably a ‘concrete’ subject. There might be some ‘abstract’ thinking, but generally the learning focuses on clear, concrete knowledge.

What is the effect of the simile in the poem?

They are difficult questions. There could be a number of different answers and the teacher, when marking a response, will use their knowledge and understanding to decide on the appropriateness of a response. Reading mark schemes in English are hilarious. They tend to focus on skills and any possible answers are provided, but there will usually be a little comment: other similar answers can be accepted. Across the different exam boards, there are lots of variations of this one sentence. Open an English textbook and you see how publishers have tried to make English a concrete subject. There seems to be a clear right answer and no opportunities for different possible interpretations or meanings.

Recently, I have been working with developing students’ memory of key texts for exams. Over the last few weeks, I have been making it a habit to make a multiple-choice quiz for each chapter in a book studied. This is partly inspired by the great Joe Kirby and his team at the Michaela School. It was while I was producing one set of multiple-choice questions that I had an idea. Usually, my questions focused on plot, character’s thoughts and key quotes. Students had to select the correct ones. Then, I thought about how this could be adapted for other parts of English and, in particular, the analysis of texts.

My Year 8s are currently reading ‘Great Expectations’ and they are analysing extracts from the novel. Recently, they completed a comprehension style task on Pip’s second meeting with Magwitch. Their answers were pretty weak. They are an able group, but something about their answers was lacking. They wrote short, superficial answers. When feeding back answers, they saw the error of their ways, but still they struggled with the next tasks. There seemed to be a gulf between their verbal responses and their written responses. They can insightful and detailed explanations when talking, but put pen to paper and they struggled to even answer the question. Step forward, Miss Havisham.

I gave students a series of quotes about Miss Havisham. Under each quote, there were four possible different interpretations. Of course, I started with a silly one to get the ball rolling. 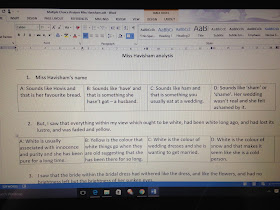 The students then discussed for a lengthy time each one. As a class, we decided which one was the most likely interpretation of the line. The great thing about this was that students were using evidence from other parts of the whole extract or novel to justify their point and their ideas. 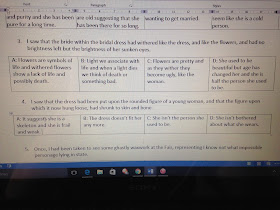 The next part of the process involved students working on creating their own multiple-choice interpretations. I gave students a blank grid and they had a go at producing their own set of interpretations. This made for some interesting discussions. One pair looked at the possible meaning behind Miss Havisham’s prayer book:

[a] She was raised a Catholic.

[b] She is constantly praying for something.

[c] She feels she has done something bad so she wants to pray for forgiveness.

[d] Faith is a strong part of her life now.

It did take a long time for students to make their own interpretations.  It wasn’t that it was too hard, but more a case of students wanting to discuss at length. To make students feel at ease, I did say that if they couldn’t think of four interpretations, they could invent a silly one. Often, this wasn’t necessary. The class engaged with the ideas and discussed things at length. 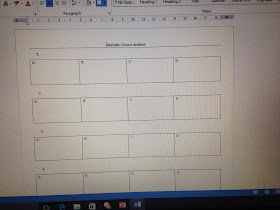 The potential for this, I think, is endless. Getting students to explore, the different meanings of a line, effect of a word, thought / feeling of a character or writer’s purpose. It opened up the dialogue. We were not limited by a right or wrong answer. We were focused on a more likely or least likely answer. A slight difference in interpretation.

While the students were creating their multiple-choice sheet, I asked them about the process. They said that it helped them to think. We discussed what the next step would be and one lad suggested that for comprehension the teacher should set it as multiple-choice answers, meaning that there are four possible answers to the question set. So, finally, I set students the following task for homework:

I crossed the staircase landing, and entered the room she indicated. From that room,
too, the daylight was completely excluded, and it had an airless smell that was oppressive. A
fire had been lately kindled in the damp old-fashioned grate, and it was more disposed to go
out than to burn up, and the reluctant smoke which hung in the room seemed colder than the
clearer air--like our own marsh mist. Certain wintry branches of candles on the high chimneypiece
faintly lighted the chamber; or it would be more expressive to say, faintly troubled its
darkness. It was spacious, and I dare say had once been handsome, but every discernible thing
in it was covered with dust and mold, and dropping to pieces. The most prominent object was
a long table with a tablecloth spread on it, as if a feast had been in preparation when the house
and the clocks all stopped together. An épergne or centre-piece of some kind was in the middle
of this cloth; it was so heavily overhung with cobwebs that its form was quite
undistinguishable; and, as I looked along the yellow expanse out of which I remember its
seeming to grow, like a black fungus, I saw speckled-legged spiders with blotchy bodies
running home to it, and running out from it, as if some circumstance of the greatest public
importance has just transpired in the spider community.

I heard the mice too, rattling behind the panels, as if the same occurrence were
important to their interests. But the black beetles took no notice of the agitation, and groped
about the hearth in a ponderous elderly way, as if they were short-sighted and hard of hearing,
and not on terms with one another.

These crawling things had fascinated my attention, and I was watching them from a
distance, when Miss Havisham laid a hand upon my shoulder. In her other hand she had a
crutch-headed stick on which she leaned, and she looked like the Witch of the place.
“This,” said she, pointing to the long table with her stick, “is where I will be laid when I
am dead. They shall come and look at me here.”
With some vague misgiving that she might get upon the table then and there and die at
once, the complete realization of the ghastly waxwork at the Fair, I shrank under her touch.
“What do you think that is?” she asked me, again pointing with her stick; “that, where
those cobwebs are?”
“I can’t guess what it is, ma’am.”
“It’s a great cake. A bride-cake. Mine!”

For each question, give four possible answers.

2.      Why has Charles Dickens used the beetle image here? Give four ideas.

3.      Why does Miss Havisham want her body to rest in this room when she dies?

7.      Create your own question and give the possible answers to it.
Question:

We are indirectly narrowing our students’ understanding of texts. Look at all comprehension tasks. They are based on having one clear answer. When we look at essays analysing a text, we are happy to accept a variety of ideas. We aren’t joining the two approaches together. On one, we are promoting a limited view of responses and interpretations; and, with the other insisting on having multiple interpretations.

If we want students to explore layers of meaning, then we, as teachers, have to build that explicitly into our teaching. We need to show students in all things we do that there are often several meanings behind a text, line or word.

What is the purpose of the blog?
Old Style: To inform.
New style: [a] inform [b] describe [c] entertain [d] persuade.